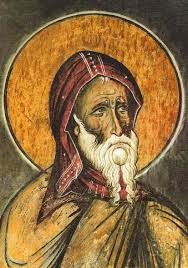 There was a certain man who had within himself love and affection for the brotherhood, and who never had in his mind any evil thought whatsoever; and a certain brother stole some things and brought [them] and deposited them with him, and the man did not consider or perceive by what means the brother had obtained them.

Now some days later the matter was discovered, and it was pointed out to the owner of the things that they had been deposited with the old man, who made excuses to them, saying, “Forgive me, for I repent.” And after a few days the brother who had stolen the things came to him, and he began to demand [them from] the old man, and said unto him, “You are the one who took the things,” the old man made excuses to him, saying, “Forgive me”; and the old man brought out all the work of his hands, and gave it to him, and the brother took it and departed. Now the disposition of the old man was such that, if one of the brethren committed a fault, and denied it, he would make excuses for him, saying, “It was I who did this thing;” thus meek and humble was the holy man, and he never wronged any man even by the least word.