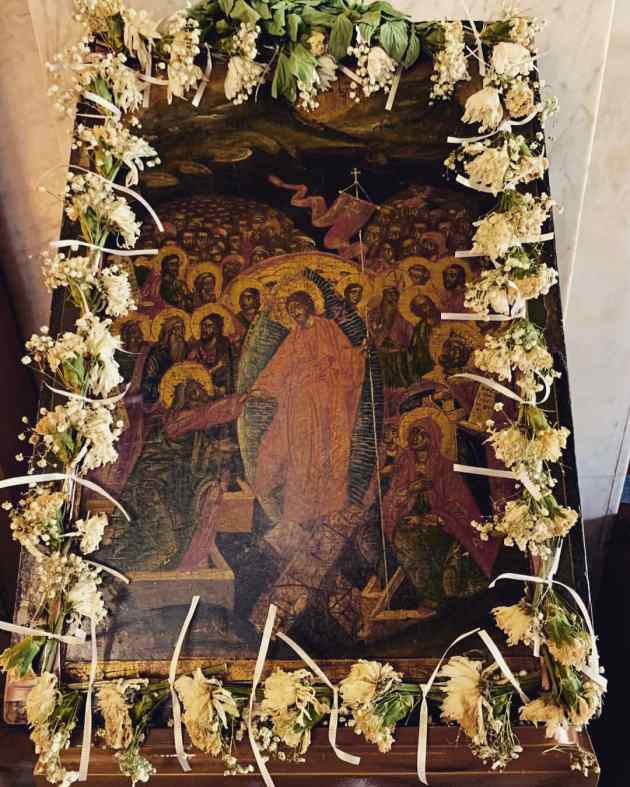 Yesterday I was crucified with Him; today I am glorified with Him; yesterday I died with Him; today I am quickened with Him; yesterday I was buried with Him; today I rise with Him. But let us offer to Him Who suffered and rose again for us — you will think perhaps that I am going to say gold, or silver, or woven work or transparent and costly stones, the mere passing material of earth, that remains here below, and is for the most part always possessed by bad men, slaves of the world and of the Prince of the world. Let us offer ourselves, the possession most precious to God, and most fitting; let us give back to the Image what is made after the Image. Let us recognize our Dignity; let us honour our Archetype; let us know the power of the Mystery, and for what Christ died.

Let us become like Christ, since Christ became like us. Let us become God’s for His sake, since He for ours became Man. He assumed the worse that He might give us the better; He became poor that we through His poverty might be rich; (2 Corinthians 8:9. He took upon Him the form of a servant that we might receive back our liberty; He came down that we might be exalted; He was tempted that we might conquer; He was dishonoured that He might glorify us; He died that He might save us; He ascended that He might draw to Himself us, who were lying low in the Fall of sin. Let us give all, offer all, to Him Who gave Himself a Ransom and a Reconciliation for us. But one can give nothing like oneself, understanding the Mystery, and becoming for His sake all that He became for ours.

As you see, He offers you a Shepherd; for this is what your Good Shepherd, who lays down his life for his sheep, is hoping and praying for, and he asks from you his subjects; and he gives you himself double instead of single, and makes the staff of his old age a staff for your spirit. And he adds to the inanimate temple a living one; to that exceedingly beautiful and heavenly shrine, this poor and small one, yet to him of great value, and built too with much sweat and many labours. Would that I could say it is worthy of his labours. And he places at your disposal all that belongs to him (O great generosity!— or it would be truer to say, O fatherly love!) his hoar hairs, his youth, the temple, the high priest, the testator, the heir, the discourses which you were longing for; and of these not such as are vain and poured out into the air, and which reach no further than the outward ear; but those which the Spirit writes and engraves on tables of stone, or of flesh, not merely superficially graven, nor easily to be rubbed off, but marked very deep, not with ink, but with grace.

These are the gifts given you by this august Abraham, this honourable and reverend Head, this Patriarch, this Restingplace of all good, this Standard of virtue, this Perfection of the Priesthood, who today is bringing to the Lord his willing Sacrifice, his only Son, him of the promise. Do you on your side offer to God and to us obedience to your Pastors, dwelling in a place of herbage, and being fed by water of refreshment; knowing your Shepherd well, and being known by him; (John 10:14) and following when he calls you as a Shepherd frankly through the door; but not following a stranger climbing up into the fold like a robber and a traitor; nor listening to a strange voice when such would take you away by stealth and scatter you from the truth on mountains, (Ezekiel 34:6) and in deserts, and pitfalls, and places which the Lord does not visit; and would lead you away from the sound Faith in the Father, the Son, and the Holy Ghost, the One Power and Godhead, Whose Voice my sheep always heard (and may they always hear it), but with deceitful and corrupt words would tear them from their true Shepherd. From which may we all be kept, Shepherd and flock, as from a poisoned and deadly pasture; guiding and being guided far away from it, that we may all be one in Christ Jesus our Lord, now and unto the heavenly rest. To Whom be the glory and the might for ever and ever. Amen