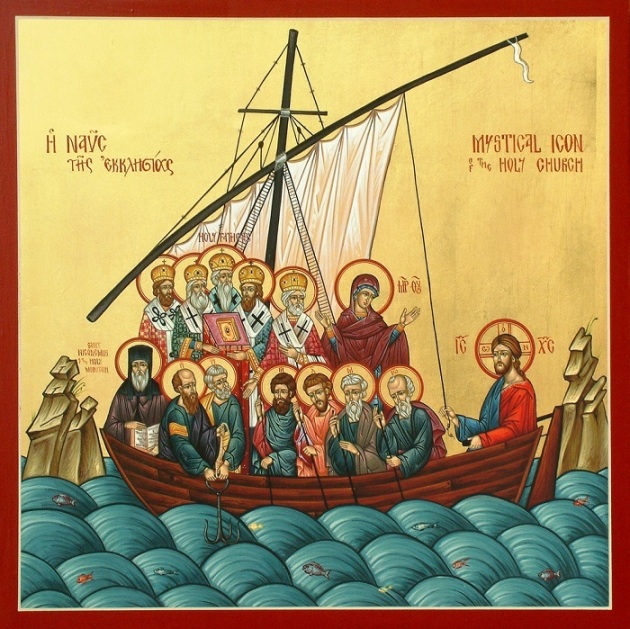 Let us therefore, in the faith of the disciples, hold converse with our Master. For the world is like the sea to us, my brethren, of which it is written, “This is the great and wide sea; there go the ships; the Leviathan, which Thou hast created to play in it” (Ps 104:25-56)

We are carried along then in this, as by the wind, through our own free-will; for every one directs his course according to his will, and either, under the pilotage of the Word, he enters into rest; or, laid hold on by pleasure, he suffers shipwreck, and is in peril by storm. For, as in the ocean, there are tempests and waves, so in the world there are many afflictions and trials. The unbelieving, therefore, “when affliction or persecution ariseth, is offended”, as the Lord said (Mk 4:17).

For being unconfirmed in the faith, and regarding temporal things, he cannot resist the difficulties which arise from afflictions. But as the house, built on the sand by the foolish man (Lk 6:49), so he, since he is without understanding, falls before the assault of temptations, as it were by the winds. But the saints (Heb 5:14), having their senses exercised by reason of practice, and being strong in faith, and understanding the word, do not become faint in trials; but although, from time to time, circumstances of greater trial arise against them, yet they continue faithful; and, awaking the Lord, Who is with them, they are delivered.

So, passing through water and fire, to a place where they can breathe freely, they duly keep the feast, offering up prayers, with thanksgiving, to God Who hath redeemed them. For either, being tempted, they are known, as Abraham; or, suffering, they are approved, as Job ; or, being oppressed and guilefully treated, as Joseph, they patiently endure it; or, being persecuted, they are not overtaken; but, as it is written, through God they “leap over the wall of wickedness” (Ps 18:29), which divideth and separateth between brethren, and turns them from the truth.

After this example, the blessed Paul, when he took pleasure in infirmities, in reproach, in necessities; in persecutions, and in distresses for Christ, rejoiced, and wished all of us to rejoice, saying, “Rejoice always; in every thing give thanks” (1 The 5:18).