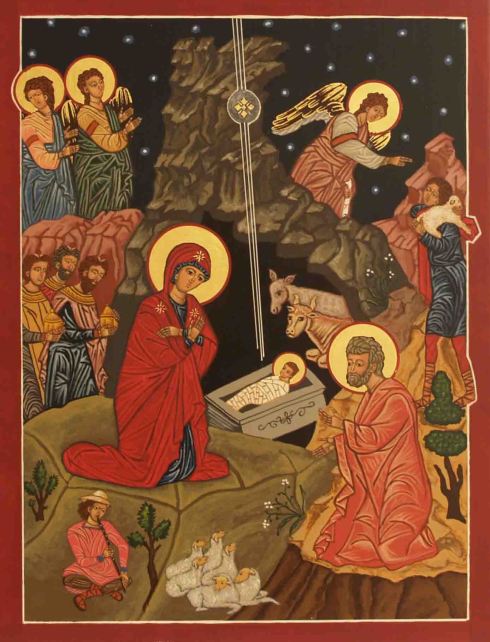 On the Nativity of Christ who is God

The power that is in his works he hath shown unto his people. When the new covenant was about to begin, it was preceded by wonders which signified the joy that was to happen to the World. For by a miracle the affliction of barrenness was removed, and trembling age was made young, and a plant sprang up from an unfruitful field; in order that this might be believed by all men, that a virgin also should conceive and bear without seed God the Word, who was to become incarnate from her, and to become a babe for our salvation in the greatness of bis mercy and of his grace toward us.

Who shall declare the Lord’s wonders? What mind or speech or hearing is there that is equal to the ineffable sea of mercifulness? The Only one, who before all the ages was born in divine fashion and without a body from the Only one, the Word of the Father, he was born alone from a mother alone in flesh and in bodily fashion; who by his birth did not destroy this mother’s virginity and so showed her to be the God-bearer, since neither was he himself changed when he willed it and became man. «the depth of the riches and of the wisdom of God!» The womb of a woman which was condemned to bear children in pains, This became a spring of immortality; which conceived and bore Emmanuel without seed, and by its incorruptible delivery loosened the bond of our race: whom let us all praise, and let us say, «Incomprehensible Lord of all, praise be to you!

Let the redeemed of the Lord say. O! the wonderful and divine pangs of tho God-bearer and Virgin Mary, through which conception and virginity were brought together, and the couch of copulation did not precede the marvellous birth, nor yet did the birth break the stamps and seals of virginity. He who was born of the Father in a divine manner and without passion, the same was also born of the Virgin in a fleshly manner without passion, being one out of two, Godhead and manhood. Him the Magi also worship; and by means of offerings they silently proclaimed him to be God: for they offered him frankincense as a god; and gold as a king; and myrrh, which is a symbol of the life-giving mortality which on our behalf he took upon him and endured of his own will, who is the only merciful one.

He bowed the heavens and came down. The Son and Word of God, who filleth all things, but is not himself confined and contained by all things, «bowed the heavens and came down» in his mercy to us on earth, and was contained without being confined in a virgin’s womb in a manner inexpressible. Having become incarnate from her without variation, he is born according to the laws of conception; and by an innovation he overcame the laws of nature: for he was conceived as a babe by a miracle, and fulfilled the time of nine months conception; but by his birth he did not burst the bond and the closed seals of bis mother’s virginity. Ask not how: for, if he is Emmanuel who was born, his birth is incomprehensible, and the manner of such a miracle is past finding out. Being led therefore by the star of light to go up to heaven with the eyes of our mind, let us all with the Magi bless and worship him as Maker of heaven and of earth, offering praise to his great mercy and his grace toward us.

The Lord shall feed me and I shall want nothing. The Shepherd of the heavenly spiritual hosts and Maker of all creation, suprasensual and perceived by the senses, having become incarnate without variation of the Holy Spirit and of the God-bearer Mary and become man, was born as a little child in Bethlehem of Judah, which means ‘house of bread’: and the shepherds, having been enlightened as to this by the divine glorv, which shone from heaven, and having seen the army of angels and the company of spiritual beings, and heard them chanting and singing a hymn of praise, searched and sought eagerly and said to one another, «Let us go and make our way to Bethlehem»; and, as in a figure, they by this foreshadowed the shepherds and priests of the church, who set themselves constantly to seek the heavenly bread, and «the Lamb of God which taketh away the sin of the world» and is mysteriously sacrificed upon his altar every day according to the riches of his great mercy.

Say unto God, ‘How terrible are thy works’. No couch of intercourse with a man cleft and broke the seal of virginity, nor was mortal seed placed in the pure uncorrupt womb; but Christ, the heavenly ear, sprang forth by a miracle from the Holy Spirit and from the Godbearer, showing also that his birth was free from phantasy, and that he is God of God, even when «he took of the seed of Abraham» without variation; in order that the Only one, who is the eternal Word, might be by dispensation «the first-born among many brethren»; since it pleased him in all things save sin only to be made like unto us, whom he was about to release from the bonds of death and destruction by his pure blood, as the only good and merciful one.

God hath spoken in his Holy One. Isaiah, when he learned beforehand the mystery of the seedless birth from the God-bearer Mary, feil into astonishment and great wonder, and cried with a loud voice and said, «Behold! a virgin shall conceive and bear»: and, when he had considered him that was born and known that he is the eternal Son of the Father, and that the same became incarnate without variation as a habe in his mercy, the child that is born to us now and not to him, proclaimed and said in prophecy, «A child has been born unto us, a son has also been given unto us», whom also his very name showed to be a messenger of a great purpose and a wonderful counsellor and mighty God. How then is she not the Godbearer, who bare the mighty God, you unbelievers, uninstructed, and foolish? whom also acknowledge with us, worshipping and saying, «Praise be to you!»

The kings of Tharshish and of the isles shall bring presents to him. The birth of Emmanuel in the flesh from the Virgin Mary was not preceded by the exercise of copulation, but only by the descent of the Holy Spirit; and this God-befitting miracle is confirmed by the closed seal of virginity which is preserved even after the birth. But, before you look at and regard the mother’s womb, and call him a babe who is borne and enclosed in bis mother’s arms, the Magi draw near, and bid and urge you to look at the star, and consider in your heart God the Word who descended and came from heaven, and to confess the same to be earthly and heavenly: whom also let us bless and worship and praise as God the Saviour of all and the merciful.

To thee have I lifted up mine eyes, the dweller in the heavens. In the wish to see with the eyes of my mind the depth of the mystery of the Humanization, I both stretch my intellect and apply it to all sides; and, being little enlightened, I restrain my sight and pass from speculation, since I am overcome by the incomprehensible light of the miracles. He who in the beginning is the Word of God and the Father without ceasing to be God was wholiy contained without being confined in the womb of Mary the Virgin the God-bearer. Not by stirring up hosts of heavenly beings did he this, but silently and in a manner inexpressible; and, having been hypostatically united to holy flesh with an intelligent soul, he became perfect man without variation. Of this David sang beforehand when he prophesied and cried, «He shall come down like rain upon a fleece». This John also was inspired moreover to write in his Gospel-teaching when he proclaimed and said, «The Word became flesh and dwelt among us». This Gabriel announced to the Virgin when he said, a hail to thee, thou that art highly favoured! The Lord is with thee, blessed among women». Him let us also praise and confess, inasmuch as he is the Saviour of our race, Christ, God over all.

When the Lord turned again the captivity of Zion. That God the Word in a manner inexpressible as he willed it «bowed the heavens and came down to us, and of the Holy Spirit and of the very essence of the most blessed Virgin without variation and without all sin became incarnate and became perfectly man by his grace let us all confess like Paul the teacher of mysteries, who wrote in his teaching and said to the peoples, «But, when the fulness of time was come, God sent his Son and he was born of a woman». For the conception and the true birth with the swaddling-clothes bear witness to the truth of the Incarnation; while to the descent without a body from on high witness is borne by the Star which appeared to the Magi; and that he is God the frankincense also that is offered to him as to a god proclaims; while the gold that was offered him which was placed before his feet as a king bears witness to his power over all; and the saving Passion which he endured on our behalf in the flesh and the annihilation of corruption by the life-giving burial were prefigured hy the sweet smell of myrrh. In virtue of them all therefore let us bless and worship him who even in his very exinanition is shown to be full, asking of him forgiveness of sins and his great mercy.