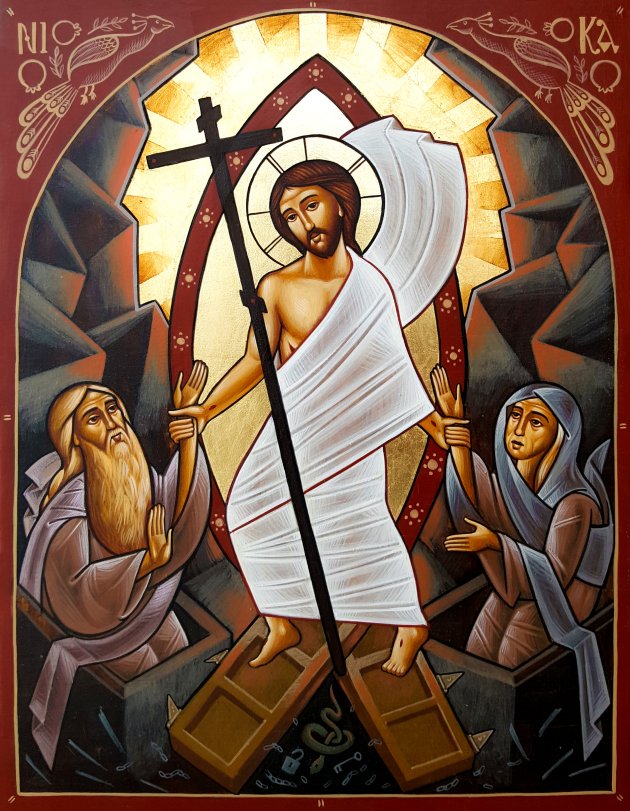 + We look at the Resurrection of Christ and we worship the holy Jesus Christ our Lord, who alone is without sin. We bow down to Your Cross O Christ, and we praise and glorify Your Resurrection. For You are our God, and we know none but You, and after Your name we are called. Glory be to the Father and the Son and the Holy Spirit.

+ Come all you believers let us bow down to the Resurrection of Christ. For behold through His Cross, joy has entered into the whole world. Let us bless the Lord continually, and glorify His Resurrection. For He was patient and destroyed death by His Death. Now and forever and unto the age of all ages, Amen.

+ All joy befits you O Theotokos. For through you Adam returned to Paradise. And Eve gained grace to replace her sadness. Through you she gained freedom once more, as well as eternal salvation. And we too let us glorify you, as a treasure of the Resurrection. “Hail to the sealed treasure through which we were given life. Hail to her who gave birth to Christ our God, who gave us life through His Resurrection.” Blessed are You O Lord, teach me Your justice.

+ The angelic hosts were amazed when they saw You counted among the dead. Yet You destroyed the power of death O Savior. You raised Adam with You and freed him from Hades. Blessed are You O Lord, teach me Your justice.

+ Why did you mix fragrant oil weeping and mourning with each other, O followers of the Lord? The luminous angel said to the women carrying the spices, “Look and be aware that the Savior has risen from the dead.” Blessed are You O Lord, teach me Your justice.

+ The women rushed very early to Your tomb, carrying fragrant oil while crying. But the angel stood before them saying, “The time of weeping is over, do not weep, but preach the Resurrection to the Apostles.” Blessed are You O Lord, teach me Your justice.

+ The women came to Your tomb carrying fragrant oil and incense O Savior. They heard the angel say to them, “Why do you seek the living among the dead.” And He being God has risen from the tomb. Glory be to the Father and the Son and the Holy Spirit.

+ We worship the Father and the Son and the Holy Spirit, one in essence. And we proclaim with the Cherubim saying, “Holy, holy, holy are You O Lord.” Now and forever and unto the age of all ages, Amen. [Three Times]

+ You gave birth O Virgin to the Giver of life, and you saved Adam from sin. You gave joy to Eve instead of sorrow, and gave us life and salvation from corruption and alteration. You became our intercessor before God our Savior, who was incarnate of you.

We have, however, read in the Gospel of three dead persons who were raised to life by the Lord, and, let us hope, to some good purpose. For surely the Lord’s deeds are not merely deeds, but signs. And if they are signs, besides their wonderful character, they have some real significance: and to find out this in regard to such deeds is a somewhat harder task than to read or hear of them. We were listening with wonder, as at the sight of some mighty miracle enacted before our eyes, in the reading of the Gospel, how Lazarus was restored to life.

If we turn our thoughts to the still more wonderful works of Christ, every one that believes rises again: if we all consider, and understand that more horrifying kind of death, every one who sins dies. But every man is afraid of the death of the flesh; few, of the death of the soul. In regard to the death of the flesh, which must certainly come some time, all are on their guard against its approach: this is the source of all their labor. Man, destined to die, labors to avert his dying; and yet man, destined to live for ever, labors not to cease from sinning. And when he labors to avoid dying, he labors to no purpose, for its only result will be to put off death for a while, not to escape it; but if he refrain from sinning, his toil will cease, and he shall live forever.

Oh that we could arouse men, and be ourselves aroused along with them, to be as great lovers of the life that abides, as men are of that which passes away! What will a man not do who is placed under the peril of death? When the sword was overhanging their heads, men have given up every means of living they had in reserve. Who is there that has not made an immediate surrender of all, to escape being slain? And, after all, he has perhaps been slain. Who is there that, to save his life, has not been willing at once to lose his means of living, and prefer a life of beggary to a speedy death? Who has had it said to him, Be off to sea if you would escape with your life, and has delayed to do so? Who has had it said to him, Set to work if you would preserve your life, and has continued a sluggard?

It is but little that God requires of us, that we may live for ever: and we neglect to obey Him. God says not to you, Lose all you have, that you may live a little time oppressed with toil; but, Give to the poor of what you have, that you may live always exempt from labor. The lovers of this temporal life, which is theirs, neither when, nor as long as they wish, are our accusers; and we accuse not ourselves in turn, so sluggish are we, so lukewarm about obtaining eternal life, which will be ours if we wish it, and will be imperishable when we have it; but this death which we fear, notwithstanding all our reluctance, will yet be ours in possession.

[St. Augustine of Hippo, Tractate 49 on the Gospel of St. John] 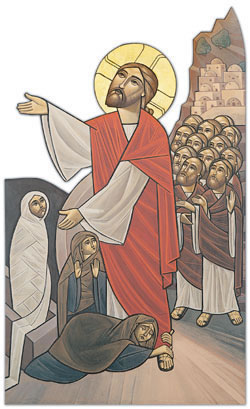 Wherefore he says, “Awake you that sleep and arise from the dead, and Christ shall shine upon you.” (Ephesians 5:14)

By the sleeper and the dead, he means the man that is in sin; for he both exhales noisome odors like the dead, and is inactive like one that is asleep, and like him he sees nothing, but is dreaming, and forming fancies and illusions.

Some indeed read, “And you shall touch Christ”; but others, “And Christ shall shine upon you”; and it is rather this latter. Depart from sin, and you shall be able to behold Christ. For every one that does ill, hates the light, and comes not to the light (John 3:20). He therefore that does it not, comes to the light.

Now he is not saying this with reference to the unbelievers only, for many of the faithful, no less than unbelievers, hold fast by wickedness; no, some far more. Therefore to these also it is necessary to exclaim, “Awake, you that sleep, and arise from the dead, and Christ shall shine upon you.” To these it is fitting to say this also, God is not the God of the dead, but of the living (Matthew 22:32). If then he is not the God of the dead, let us live. 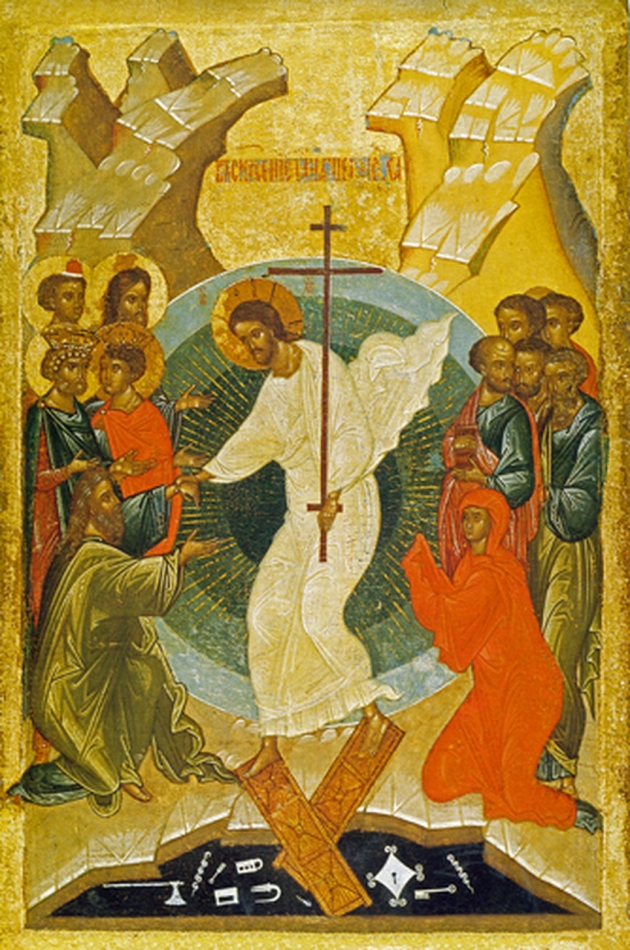 When mankind was estranged from him by disobedience, God our Saviour made a plan for raising us from our fall and restoring us to friendship with himself. According to this plan Christ came in the flesh, he showed us the gospel way of life, he suffered, died on the cross, was buried and rose from the dead. He did this so that we could be saved by imitation of him, and recover our original status as sons of God by adoption.

To attain holiness, then, we must not only pattern our lives on Christ’s by being gentle, humble and patient, we must also imitate him in his death. Taking Christ for his model, Paul said that he wanted to become like him in his death in the hope that he too would be raised from death to life.

We imitate Christ’s death by being buried with him in baptism. If we ask what this kind of burial means and what benefit we may hope to derive from it, it means first of all making a complete break with our former way of life, and our Lord himself said that this cannot be done unless a man is born again. In other words, we have to begin a new life, and we cannot do so until our previous life has been brought to an end.

When runners reach the turning point on a racecourse, they have to pause briefly before they can go back in the opposite direction. So also when we wish to reverse the direction of our lives there must be a pause, or a death, to mark the end of one life and the beginning of another.

Our descent into hell takes place when we imitate the burial of Christ by our baptism. The bodies of the baptised are in a sense buried in the water as a symbol of their renunciation of the sins of their unregenerate nature. As the Apostle says: The circumcision you have undergone is not an operation performed by human hands, but the complete stripping away of your unregenerate nature.

This is the circumcision that Christ gave us, and it is accomplished by our burial with him in baptism. Baptism cleanses the soul from the pollution of worldly thoughts and inclinations: You will wash me, says the psalmist, and I shall be whiter than snow. We receive this saving baptism only once because there was only one death and one resurrection for the salvation of the world, and baptism is its symbol.

Question: What is the resurrection of the soul, of which the Apostle speaks, saying, ‘If ye be risen with Christ’?, (Colossians 3:1).

Answer: When the Apostle said, ‘God, Who commanded the light to shine out of darkness, hath shined into our hearts’ (2 Corinthians 4:6) the resurrection, he showed this resurrection to be the exodus from the old state (which in the likeness of Sheol incarcerates a man so that the light of the Gospel will not shine mystically upon him. This is a breath of life through hope in the resurrection, and by it the dawning of divine wisdom shines in his heart), so that a man should become new, having nothing of the old man. This the prophet also says, ‘And I shall give them a new heart and a new spirit’ (Ezekiel 36:26). Then the image of Christ is formed in us through the Spirit of wisdom and the revelation of the knowledge of Him.

Your Resurrection, Christ Savior, is praised by the angels in heaven; and make us on earth worthy with pure hearts to glorify You.